Disproportionate responses: The UN Commission of Inquiry on the 2014 Gaza Conflict

It is ironic that UN reports on conflicts which involve Israel always accuse Israel of a "disproportionate response", ironic because that is a precise definition of how the UN handles Israel: For example, according to UN Watch, the UN General Assembly passed 25 resolutions in 2013, 21 of them condemning Israel.

The UN report on the 2014 conflict was commissioned by the UN Human Rights Council,  a body which from 2006 - 2015 issued over 100 resolutions of condemnation, over half addressed to Israel. 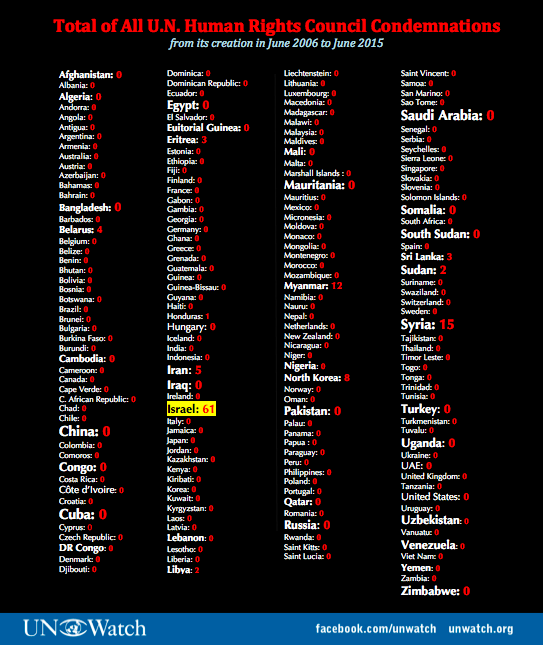 The latest report records Palestinian suffering and searches (with a magnifying glass) for possible evidence of Israeli war crimes. I think it is fair to say that no other conflict is subject to such tight inspection. Such inquiries have forced the Israelis to take increasing care during wars and conflicts and as a result, the Israelis probably take more care to avoid war crime accusations than any other army. So if you hate the Israelis you have more reason to hate them and if you love them, you have more reason to love them.

We can't really quantify how relatively bad - or good - we Israelis are, because other conflicts are not subject to the same scrutiny. We also can't tell if we are getting worse or improving because the report does not compare out behaviour with previous conflicts.

The report argues that war crimes are judged by the proportionality of the response and then assesses proportionality in terms of numbers killed, where there is a clear imbalance. However, that is only one way of assessing war crimes.  Intent to kill civilians would be another and persistence of behaviour needs to be taken into account (is it isolated or systematic abuse).
The Palestinians launched 5,000 missiles at Israel (paragraph 66) and the Israelis bombed them 6,000 times (paragraph 111), so there are other ways of measuring proportionality, and the death toll disparity is partially the result of extensive Israeli investment in protection, while Hamas frequently encouraged Palestinians not to seek protection and did not invest in the issue.

The lead up to the conflict, when the Israelis often did not respond to missiles and the Palestinians persistently fired missiles for no reason, is not discussed. The Israelis tend to accumulate anger and then vent. The objective of the venting is to discourage further attacks by causing a lot of damage. The war is thus a defensive-offensive war: offensive in terms of destruction, defensive in terms of objectives and the report is focusing on a narrow section of a longer conflict.

How you understand offensive vs. defensive hinges on what you think of the Israeli blockade and that is a serious problem with this report.  The report relies on a "Gaza is still occupied" formula, this is addressed in paragraphs 26 and 27 of the report. Gaza is still occupied because:

"...the law of occupation also applies in areas where a state possesses the “capacity to send troops within a reasonable time to make its power felt"."

Egypt has a border with Gaza which vilifiers of Israel find convenient to ignore. There is no reason why flotillas to Gaza should not go to Egypt and then cross into Gaza from there. The reason why the Palestinians had so many weapons was that the Moslem Brotherhood had been in power in Egypt and allowed a flow of weapons into Gaza. Precisely for that reason Israel does not have the capacity to easily re-occupy Gaza, as the report claims.  At the moment, it would be easier to conquer Damascus then to re-occupy Gaza.

The UN Security Council, which is the only UN body whose decisions are considered binding on all UN members, seems to accept that there was a full Israeli withdrawal in resolution 1860 but says that Israel retains some responsibility towards the population of Gaza and must continue to allow free flow of goods, water and electricity. Through-out the conflict Israel kept up these services and goods continued to flow in and out of Gaza. The Israelis can interfere with the flow of goods, but their ability to use these elements for control is restricted by the Security Council.  It is not an occupation but some other form of relationship.

It is probably a good idea to report on conflicts, but then all conflicts must be reported on, not just those involving Israel.