My grandmother wrote an account of her journey as part of her citizenship training for the USA and I have attached it as a jpg at the end of this blog.
In her account, she says she travelled to Koenigsburg, now called Kaliningrad. The left visa page in the image above has her exit stamp and shows she flew from Koenigsburg airport on the 3rd of August 1940 (Wikipedia says it is one of the oldest passenger airports in the world). She flew from there to Moscow because she hadn't managed to obtain a Latvian visa: The USSR had invaded Latvia 5 weeks earlier in  late June 1940. I checked this journey on the Eurorail site: They recommend a train to Prague where you take a train to Warsaw, from Warsaw you take a train to Vilnius in Latvia and from there you can get a train to Kaliningrad. It takes two days. 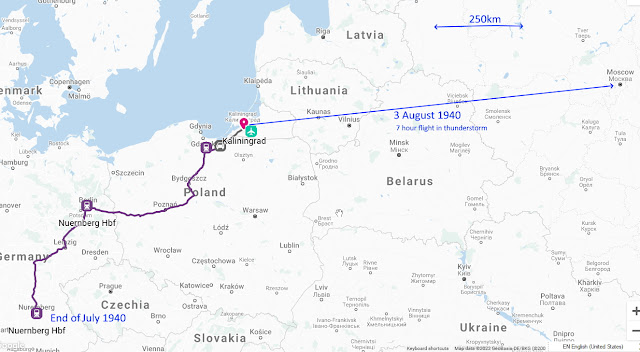 She travelled from Harbin overland for two and a half weeks to "Fusan", which I think is Fusan in South Korea (now called Busan), then Japanese occupied. That's over 1,200 kilometers through Japanese occupied China. A couple of other people who took the route also went this way, so I assume it was a standard route. Apparently there was a single train from Harbin in Northern China which went down to Busan at the the Southern tip of Korea. See https://en.wikipedia.org/wiki/Gyeongbu_Line.
From Busan she sailed to Kobe in Japan. Apparently there was a largish Jewish community in Kobe and these helped Jews arriving from Germany. The American Jewish Joint Distribution Committee was providing funds for Jewish refugees (though she says nothing about this), so once she got to Kobe she was safe.
In 2021, a signboard was erected in Kobe commemorating the Jews who escaped through Japan: https://www.asahi.com/ajw/articles/14039425. See also https://en.wikipedia.org/wiki/History_of_the_Jews_in_Kobe. 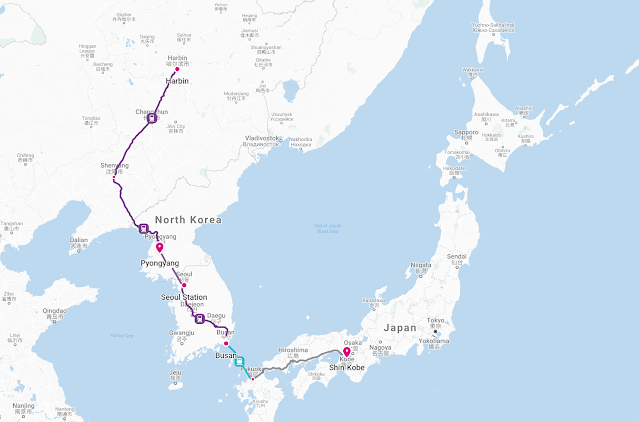 Betty left Kobe on the 15th of August 1940, arriving in Seattle two weeks later. I found the manifest of the ship she arrived on. It was called the Heian Maru (it has a Wikipedia page) and arrived 29 August 1940, about half the passengers were Jewish refugees. She gave her occupation as 'Housewife' and her nationality as 'German'. Jewish passengers often gave their nationality as "Jew" or "Hebrew". She evidently had a strong German identity, if after all those years of persecution she still called herself a German.
The date of her arrival in the USA was exactly one year and one day after her son Heinz arrived in England.