I had a chat with my sister yesterday. She lives in Rome, and tells me that a friend of hers read about my grandmother's passport (I have a copy of her Nazi-issued passport) and volunteered to help me translate the German. That inspired me to do a bout of research into my father's childhood in the Weimar republic. If you read my earlier post (my other passport is with Mossad) then you will know my father, who grew up in Nuremburg, only just got out of Germany thanks to a parliamentary question and a forged passport.
My grandmother, Betty Lowenstein (maiden name Ehrlich), caught one of the last Trans-Siberian trains before the Nazi invasion of Russia. Family legend has it that as she caught the train to leave Germany, a woman handed her a baby to take with her.

I should add that her husband committed suicide in 1932. Though there may be some question marks over exactly how that happened to him. I have his death certificate here.

My father left Germany on the 28th of August 1939. three days before the invasion of Poland. He was fifteen and flew to Britain - my grandmother told my mother she sent him by plane to ensure that he arrived safely. On the day of the invasion she tried to leave Germany (she had a visa for Britain) but was turned back as war had been declared. She remained trapped in Germany for another year which she spent trying to obtain visas for a journey out of Europe to the East. She got a visa for the USA on the 10th of May 1940.

My grandmother wrote an account of her journey as part of her citizenship training for the USA and I have attached it as a jpg at the end of this blog.
In her account, she says she travelled to Koenigsburg, now called Kaliningrad. The left visa page in the image above has her exit stamp and shows she flew from Koenigsburg airport on the 3rd of August 1940 (Wikipedia says it is one of the oldest passenger airports in the world). She flew from there to Moscow to avoid travelling through (semi-independent) Latvia which wouldn't give her a visa. I checked this journey on the Eurorail site: They recommend a train to Prague where you take a train to Warsaw, from Warsaw you take a train to Vilnius in Latvia and from there you can get a train to Kaliningrad. It takes two days.
From Moscow she took the Trans-Siberian railway - a 9,000 kilometer journey. She wasn't allowed to take any money out of Germany (there was a ban on Jews taking money or goods) so she paid for the whole thing in advance and was given vouchers to use on the train. Jews who had a visa to leave Germany could count on help from Jewish charities who would pay their travel and provide for them on the way.

She travelled from Harbin overland for two and a half weeks to "Fusan", which I think is Fusan in South Korea (now called Busan), then Japanese occupied. That's over 1,200 kilometers through Japanese occupied China. A couple of other people who took the route also went this way, so I assume it was a standard route. Apparently there was a single train from Harbin in Northern China which went down to Busan at the the Southern tip of Korea. From Busan she sailed to Kobe in Japan. Apparently there was a largish Jewish community in Kobe and these helped Jews arrving from Germany. The American Jewish Joint Distribution Committee was providing funds for Jewish refugees (though she says nothing about this), so once she got to Kobe she was safe. She left Kobe on the 15th of August 1940, arriving in Seattle two weeks later. I found the manifest of the ship she arrived on. It was called the Heian Maru and arrived 29 August 1940, about half the passengers were Jewish refugees. She gave her occupation as 'Housewife' and her nationality as 'German'. Jewish passengers often gave their nationality as "Jew" or "Hebrew". She evidently had a strong German identity, if after all those years of persecution she still called herself a German.
The date of her arrival in the USA was exactly one year and one day after her son Heinz arrived in England.

I assume her brothers were in Reading.
Altogether, the journey of a lifetime. Perhaps one day I can recreate it.

Us naturalization certificate
My sister's friend may be right. We always thought the amazing story was my father's but it is possible that my grandmother with her precise documentation has left something for posterity that outweighs his story. Her account of her journey is so remarkable that it should probably be typed and uploaded to the internet.

Betty had sent her son to England on the 28th of August 1939, intending to join him three days later. Instead it took her a year to reach the USA, arriving on the 19th of August 1940. In June 1941 Germany invaded the USSR and this route would have closed. Six months later Japan attacked the USA and the Pacific end must have been cut.

For further information and account of how her son was saved see http://en.wikipedia.org/wiki/Heinz_Bernard . 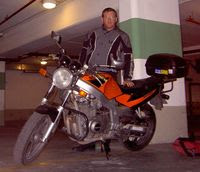 A fine democracy: Why Israel shouldn't change its voting system