I have got a job as a "breaking news editor" at the Jerusalem Post.  Twenty years ago this would have been my dream job and it still goes quite a long way. Basically you spend all day listening to, and watching the news and then post it on the website. www.jpost.com  Some of the material is just feeds from Associated Press, and others are articles by Jerusalem Post staff which you post to the website, but a certain amount needs to be written by the editors and a lot of the AP stuff needs adjusting to reflect Israeli interests. also the editors decide what goes where and how important things are.  Oh and you get to approve the talkbacks.

At the moment the Post offices are in Jerusalem, and boy are they filthy. They've had the same offices since 1932 (when they were called the Palestine Post).  Outside there are loading bays which I assume were where once the paper would have gone onto lorries (trucks) every day for delivery round Israel.  But times have changed and the post is no longer printed there and its readership have mostly moved to HaAretz.  However I am told the website gets 200,000 clicks a day.  According to this site, they get 500,000 unique visitors per month (that is different individuals accessing the site).  The paper version sells 12,000 a day and 40,000 at weekends (See my source). It used to sell 70,000 a day. Apparently the site is popular with evangelical christians in the USA.

The Post is supposed to be moving to Tel-Aviv next month, but for the moment I have to drive out to Jerusalem on my motorbike which is now getting a bit old for this kind of journey. Basically the time has come and possibly gone when I should get a new one.

Fortunately the Post's offices are near the entrance to Jerusalem, so there are no traffic issues once I get there. Over the years the neighbourhood where the offices are located has become haredi.  My guess is they can sell the offices to make way for apartment blocks and make a bit of money on the move.  Anyway the general location (and the poor wages) means that I am finding it hard to find somewhere to eat lunch and yesterday I wandered into a mall where everyone was haredi.  That is to say everyone but me and the Arab security guard at the entrance was wearing side curls, black silk jackets etc.  The women were all pushing prams followed by chains of children. It wasn't like a stetl, it was like an alternative universe, imagine going into your local shopping centre and finding everyone dressed in almost identical black 17th century outfits  - and unshaven. It is a little threatening at times, though you quickly realize there is no reason to be afraid.

For some reason British-English is a common language round there and I even saw someone driving a car with UK number plates.   You also hear a certain amount of Yiddish and see children playing and talking Yiddish, though I would say that Hebrew and English are the dominant tongues.  Maybe the time will come when all haredis speak English, or they will create a Jewish version of English (Yiddlish?) rather like Ebonics.  Over time it seems to me that nearly all the world's Jews are moving to either live in Israel or the English speaking world.  At present 80% live in Israel and the USA.

The Jerusalem Post is like a UN of the English speaking world. You find yourself sitting next to an Australian, an American and a Canadian.  There is an Englishman but he's leaving as he doesn't want to move out of Jerusalem.

One good thing about going to Jerusalem is that the city is so bizarre its liking going to another country.   So several times a week  I get to feel like I've been abroad.

P.S.  If you want to read more about my time at the Post see How I won and lost a global scoop 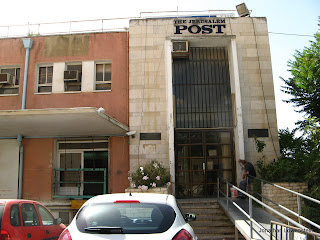 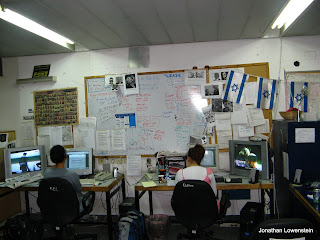