To bomb or not to bomb and whether its just a bluff: Israel, Iran and nuclear bombs.

If Israel bombs Iran, there is no certainty that it will manage to halt the Iranian nuclear program while at the same time the price of oil will go through the roof (the Iranians will probably close the straits of Hormuz), and the main beneficiaries of high oil prices will not be Israel or its allies.
Even if the Iranians have trouble selling oil, if the price is very high, they don't need to sell as much.
Meanwhile, back in the West, the economies are very vulnerable and spiraling oil prices will only make problems worse. The main beneficiaries of declining Western economic power are likely to be China, India and Brazil: the rapidly emerging new world powers.
So there is a good chance that not only will Israel not stop the bomb, it'll also shoot its friends in the foot, while strengthening at least some of its enemies.
The Speaker of the Iranian Parliament said this week that "the Zionists were too cowardly to attack Iran" or words to that affect, and he may be right in the sense that if Israel meant to attack, then it would have done so.  Maybe I'm wrong and nowadays Israel stages endless public debates before attacking, but certainly in the past, Israeli planes suddenly appeared out of nowhere to smash its enemies (think Six Day war, Entebbe, the Iraqi reactor).
Only a few years ago the Israelis suddenly bombed a Syrian nuclear project. So I suspect that if Israel keeps fussing about it, then it won't. On the other hand, maybe the fuss is a tool to get the West to take action. Because that's the thing: Israel can use the threat of bombing Iran to leverage sanctions on Iran and that is now happening. The new sanctions are clearly being designed by clever minds. Iran was recently cut off from the Swift international banking transfer system, and I assume some other clever financial blows will be emerging soon. So the real question is, will the sanctions on Iran work? Will Iran end up like Egypt and Syria in internal chaos? Which is presumably the main idea behind the sanctions.
And who will benefit from the sanctions? The West won't, that's for sure, as all that Iranian oil money gets pumped eastwards to China and India (presumably at a discount thanks to the sanctions), but the main beneficiary would seem to be Turkey, since Iran is increasingly relying on Turkey to handle its oil and finances. Ha'Aretz recently estimated that 13 billion dollars a year of Iranian business is now being handled by Turkey.  So the moderate Islamism of Turkey gains from Western sanctions on Iran, although it remains to be seen if moderate Islamism really exists. Perhaps it’s like moderate Nazism and Israel is just trading Himmler (Ahmadinajad) for Hess (Erdogan).  On the other hand it might be Stalin for Scandinavian Socialism. A dominant moderate Islamism could be a big improvement. Either way it seems that Turkey is re-emerging as a second or third-level global power alongside Iran, assuming Iran survives the sanctions.

I think Iran will survive, because the West no longer calls the shots. The West may still be powerful, but the world economy is no longer under Western thumbs – an ironic by product of the defeat of Communism.
The nuclear bomb project is actually weakening Iran, because it is paying vast sums to develop a few bombs it can't (and hopefully won't) use. So while Israel won't manage to stop Iran, its made them pay such a hefty price for the damned bomb and it may never have been worth it in the first place.  On top of that, I wouldn't trust Iranian nuclear safety; They may well end up poisoning themselves.

If Iran succeeds and gets the bomb, there is a whole new game to play and its hard to foresee the consequences. The Iranians may choose to distribute bombs to their pals but quite often the threat of nuclear war has the effect of moderating national behavior as the stakes grow higher. The main problem with using the bomb against Israel is that it will not be good for the Palestinians either while Israel will no doubt be forced to respond by developing sophisticated new forms of nuclear counter-weaponry which won't do anyone any good but will keep the enemy at bay.
- March 25, 2012 No comments: 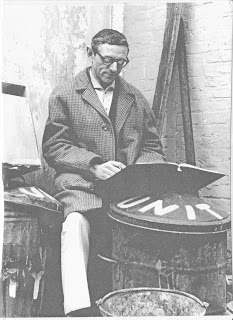